Scott Jensen is an Engineering Director and colleague of mine from Dell with deep networking and operations experience.  He had first hand experience deploying OpenStack and Hadoop and has a critical role in defining Dell’s Reference Architectures in those areas.  When I saw this writeup about cloud networking (first post), I asked if it would be OK to post it here and share it with you.

In a traditional data center this was not all that difficult (relatively).  You knew what was going to running on what system (physically) and could plan your infrastructure accordingly.  The majority of the traffic moved in a North/South direction. Or basically from outside the infrastructure (the internet for example) to inside and then responded back out.  You knew that if you had to design a communication channel from an application server to a database server this could be isolated from the other traffic as they did not usually reside on the same system. 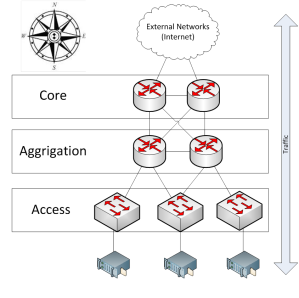 Virtualization made this more difficult.  In this model you are sharing systems resources for different applications.  From the networks point of view there are a large number of systems available behind a couple of links.  Live Migration puts another wrinkle in the design as you now have to deal with a specific system moving from one physical server to another.  Network Virtualization helps out a lot with this.  With this you can now move virtual ports from one physical server to another to ensure that when one virtual machine moves from a physical server to another that the network is still available.  In many cases you managed these virtual networks the same as you managed your physical network.  As a matter of fact they were designed to emulate the physical as much as possible.  The virtual machines still looked a lot like the physical ones they replaced and can be treated in vary much the same way from a traffic flow perspective.  The traffic still is primarily a North/South pattern.

Cloud, however, is a different ball of wax.  Think about the charistics of the Cattle described above.  A cloud application is smaller and purpose built.  The majority of its traffic is between VMs as different tiers which were traditionally on the same system or in the same VM are now spread across multiple VMs.  Therefore its traffic patterns are primarily East/West.  You cannot forget that there is a North/South pattern the same as what was in the other models which is typically user interaction.  It is stateless so that many copies of itself can run in tandem allowing it to elastically scale up and down based on need and as such they are appearing and disappearing from the network.  As these VMs are spawned on the system they may be right next to each other or on different servers or potentially in different Data Centers.  But it gets even better. 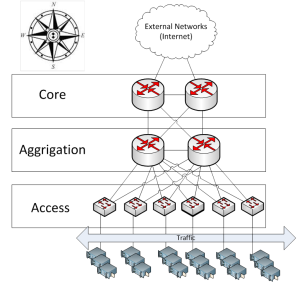 Cloud architectures are typically multi-tenant.  This means that multiple customers will utilize this infrastructure and need to be isolated from each other.  And of course Clouds are self-service.  Users/developers can design, build and deploy whenever they want.  Including designing the network interconnects that their applications need to function.  All of this will cause overlapping IP address domains, multiple virtual networks both L2 and L3, requirements for dynamically configuring QOS, Load Balancers and Firewalls.  Lastly in our list of headaches is not the least.  Cloud systems tend to breed like rabbits or multiply like coat hangers in the closet.  There are more and more systems as 10 servers become 40 which becomes 100 then 1000 and so on.

So what is a poor Network Engineer to do?

First get a handle on what this Cloud thing is supposed to be for.  If you are one of the lucky ones who can dictate the use of the infrastructure then rock on!  Unfortunately, that does not seem to be the way it goes for many.  In the case where you just cannot predict how the infrastructure will be used I am reminded of the phrase “there is not replacement for displacement”.  Fast links, non-blocking switches, Network Fabrics are all necessary for the physical network but will not get you there.  Sense as a network administrator you cannot predict the traffic patterns who can?  Well the developer and the application itself.  This is what SDN is all about.  It allows a programmatic interface to what is called an overlay network.  A series of tunnels/flows which can build virtual networks on top of the physical network giving that pesky application what it was looking for.  In some cases you may want to make changes to the physical infrastructure.  For example change the configuration of the Firewall or Load Balancer or other network equipment.  SDN vendors are creating plug-ins that can make those types of configurations.  But if this is not good enough for you there is NFV.  The basic idea here is that why have specialized hardware for your core network infrastructure when we can run them virtualized as well?  Let’s run those in VM’s as well, hook them into the virtual network and SDN to configure them and we now can virtualize the routers, load balancers, firewalls and switches.  These technologies are in very much a state of flux right now but they are promising none the less.  Now if we could just virtualize the monitoring and troubleshooting of these environments I’d be happy.

3 thoughts on “Networking in Cloud Environments, SDN, NFV, and why it matters [part 2 of 2]”