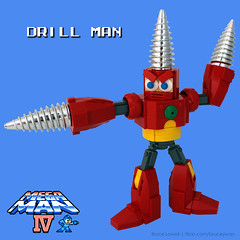 Drill Man! by BruceLowell.com [creative commons] We’re so excited about our in-process release that we’ve been relatively quiet about the last OpenCrowbar Drill release (video tour here).  That’s not a fair reflection of the level of capability and maturity reflected in the code base; yes, Drill’s purpose was to set the stage for truly ground breaking ops automation work in the next release (“Epoxy”).

So, what’s in Drill?  Scale and Containers on Metal Workloads!  [official release notes]

The primary focus for this release was proving our functional operations architectural pattern against a wide range of workloads and that is exactly what the RackN team has been doing with Ceph, Docker Swarm, Kubernetes, CloudFoundry and StackEngine workloads.

In addition to workloads, we put the platform through its paces in real ops environments at scale.  That resulted in even richer network configurations and options plus performance…