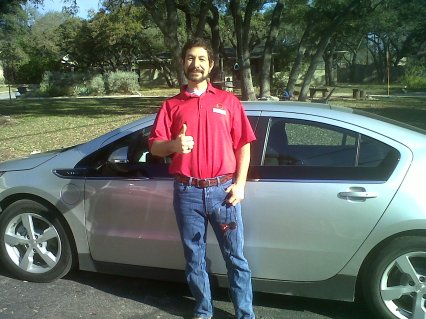 Today Chevy took my SXSW loaner Volt back to the dealership in the cloud.  While I was already inclined toward the Volt, I was much more impressed that I expected.  Frankly, the fact that the Volt and my home-conversion RAVolt both have a 30 mile range made the Volt seem like a pretend EV on the surface.  Yet, the Volt proved it was a full EV and more.

The Volt is a very solid electric car with the all torque and feel I was expecting.

Since the Volt was delivered without a charge, my first day in the car relied on the gas hybrid feature.  Even on gas, I was getting >40 MPG.  While I would have preferred to get the Volt fully charged, it was an important lesson for me to see it perform as a gas fueled car first.

Once I got it charged, I was able to drive nearly all my trips electric only.  That included my 30+ mile commute.  The magic of the Volt is that I never worried about running out of charge.  As an EV driver who has had close scrapes, that is a truly liberating experience.

I enjoyed playing with the Volt’s drive system.  I managed to find an accurate power input/output gauge on the dash instrumentation (the center console view is mainly a pretty animation for passengers).  I was able to extend my electric range using feedback from the more accurate gauge.  In addition, the built-in tutorial explained that I could use the PRNDL “low gear” in traffic.  Low gear activated behaviors in the Volt that made it more efficient AND EASIER to drive in traffic than conventional gas cars.  I was also intrigued by how efficiently the Volt used its gas generator – it used some smarts so the generator ran as little of possible.  Of course, I also enjoyed the acceleration of the electric motor 🙂

In addition to the power train, I found the fit and finish of the Volt to be very satisfying.  The electronics were effective, interior comfortable and handling responsive.  While it did not pretend to be a luxury car, the Volt does not feel like a econobox either.

One note: if you are considering a Volt then plan on a 220 charger.  Relying on charging from household power is simply not practical.  Using 220, you can charge quickly at night when power is cheapest/cleanest to generate.