In this video, Rob Hirschfeld and Greg Althaus provide operators real-world examples of how best to migrate your provisioning platform to Digital Rebar Provision. This blog highlights one of these migration ideas.

Watch the full video below to hear other scenarios presented for migration options.

Get started with Digital Rebar today:

Today we announced the availability of Digital Rebar Provision, the industry’s first cloud-native physical provisioning utility.  We’ve had this in the Digital Rebar community for a few weeks before offering support and response has been great!

By releasing their API-driven provisioning tool as a stand-alone component of the larger Digital Rebar suite, RackN helps DevOps teams break automation bottlenecks in their legacy data centers without disrupting current operations. The stand-alone open utility can be deployed in under 5 minutes and fits into any data center design. RackN also announced a $1,000 starter support and consulting package to further accelerate transition from tools like Cobbler, MaaS or Stacki to the new Golang utility.

“We were seeing SREs suffering from high job turnover,” said Rob Hirschfeld, RackN founder and CEO. “When their integration plans get gridlocked by legacy tooling they quickly either lose patience or political capital. Digital Rebar Provision replaces the legacy tools without process disruption so that everyone can find shared wins early in large SRE initiatives.”

Data center provisioning is surprisingly complex because it’s caught between cutting edge hardware and arcane protocols and firmware requirements that are difficult to disrupt.  The heart of the system is a fickle combination of specific DHCP options, a firmware bootstrap environment (known as PXE), a very lightweight file transfer protocol (TFTP) and operating system specific templating tools like preseed and kickstart.  Getting all these pieces to work together with updated APIs without breaking legacy support has been elusive.

By rethinking physical ops in cloud-native terms, RackN has managed to distill out a powerful provisioning tool for DevOps and SRE minded operators who need robust API/CLI, Day 2 Ops, security and control as primary design requirements. By bootstrapping foundational automation with Digital Rebar Provision, DevOps teams lay a foundation for data center operations that improves collaboration between operators and SRE teams: operators enjoy additional control and reuse and SREs get a doorway into building a fully automated process.

A pragmatic path without burning downing the data center

“I’m excited to see RackN providing a pragmatic path from physical boot to provisioning without having to start over and rebuild my data center to get there.” said Dave McCrory, an early cloud and data gravity innovator.  “It’s time for the industry to stop splitting physical and cloud IT processes because snowflaked, manual processes slow everyone down.  I can’t imagine an easier on-ramp than Digital Rebar Provision”

The RackN Digital Rebar is making it easy for Cobbler, Stacki, MaaS and Forman users to evaluate our RESTful, Golang, Template-based PXE Provisioning utility.  Interested users can evaluate the service in minutes on a laptop or engage with RackN for a more comprehensive trail with expert support.  The open Provision service works both independently and as part of Digital Rebar’s full life-cycle hybrid control.

Want help starting on this journey?  Contact us and we can help.

Why has it been so hard to untie from Cobbler? Why can’t we just REST-ify these 1990s Era Protocols? Dealing with the limits of PXE, DHCP and TFTP in wide-ranging data centers is tricky and Cobbler’s manual pre-defined approach was adequate in legacy data centers.

Now, we have to rethink Physical Ops in Cloud-first terms. DevOps and SRE minded operators services that have need real APIs, day-2 ops, security and control as primary design requirements.

Digital Rebar Provision is a new generation of data center automation designed for operators with a cloud-first approach. Data center provisioning is surprisingly complex because it’s caught between cutting edge hardware and arcane protocols embedded in firmware requirements that are still very much alive.

We invite you to try out Digital Rebar Provision yourself and let us know what you think. It only takes a few minutes. If you want more help, contact RackN for a $1000 Quick Start offer.

Operators & SREs – we need your feedback on an open DHCP/PXE technical preview that will amaze you and can be easily tested right from your laptop.

We wanted to make open basic provisioning API-driven, secure, scalable and fast.  So we carved out the Provision & DHCP services as a stand alone unit from the larger open Digital Rebar project.  While this Golang service lacks orchestration, this complete service is part of Digital Rebar infrastructure and supports the discovery boot process, templating, security and extensive image library (Linux, ESX, Windows, … ) from the main project.

The project APIs and CLIs are complete for all provisioning functions with good Swagger definitions and docs.  After all, it’s third generation capability from the Digital Rebar project.  The integrated UX is still evolving.

Here’s a video of the quick install process.

Here are some examples from the documentation: 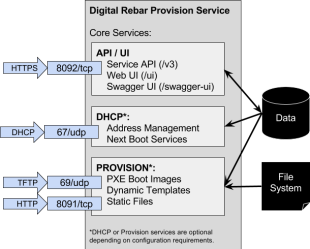 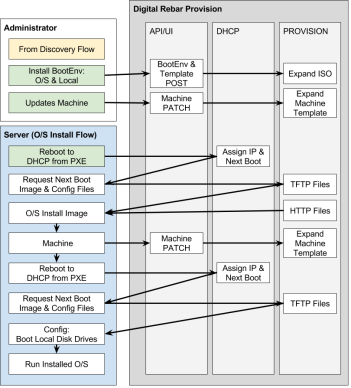 This page is very very old and Crowbar has progressed significantly since this was posted.  For better information, please visit the Crowbar wiki and  review my Crowbar 2 writeups.

While still relevant and accurate, the information on this page does not reflect the latest information about the now Apache 2 released Crowbar code.  In the 4+ months following this post, we substantially refactored the code make make it more modular (see Barclamps), better looking, and multi-vendor/multi-application (Hadoop & RHEL).  If you want more information, I recommend that you try Crowbar for yourself.

I’ve been getting some “how does Crowbar work” inquiries and wanted to take a shot at adding some technical detail.   Before I launch into technical babble, there are some important things to note:

LIVE DEMO (video via Barton George): If you’re at SXSW on 3/14 @ 2pm in Kung Fu Salon, you can ask Greg Althaus to explain it – he does a better job than I do.

Here’s what you need to know to understand Crowbar:

Crowbar is a PXE state machine.

The primary function of Crowbar is to get new hardware into a state where it can be managed by Chef.   To get hardware into a “Chef Ready” state, there are several steps that must be performed.  We need to setup the BIOS, RAID, figure out where the server is racked, install an operating system, assign IP networking and names, synchronize clocks (NTP) and setup a chef client linked to our server.  That’s a lot of steps!

In order to do these steps, we need to boot the server through a series of controlled images (stages) and track the progress through each state.  That means that each state corresponds to a PXE boot image.  The images have a simple script that uses WGET to update the Crowbar server (which stores it’s data in Chef) when the script completes.  When a state is finished, Crowbar will change the PXE server to provide the next image in the sequence.

During the Crowbar managed part of the install, the servers will reboot several times.  Once all of the hardware configuration is complete, Crowbar will use an operating system install image to create the base configuration.  For the first release, we are only planning to have a single Operating System (Ubuntu 10.10); however, we expect to be adding more operating system options.

The current architecture of Crowbar (and the Chef Server that it extends) is to use a dedicated server in the system for administration.  Our default install adds PXE, DHCP, NTP, DNS, Nagios, & Ganglia to the admin server.  For small systems, you can use Chef to add other infrastructure capabilities to the admin server; unfortunately, adding components makes it harder to redeploy the components.  For dynamic configurations where you may want to rehearse deployments while building Chef recipes, we recommend installing other infrastructure services on the admin server.

Of course, the hardware configuration steps are vendor specific.  We had to make the state machine (stored in Chef data bags) configurable so that you can add or omit steps.  Since hardware config is slow, error prone and painful, we see this as a big value add.  Making it work for open source will depend on community participation.

Once Chef has control of the servers, you can use Chef (on the local Chef Server) to complete the OpenStack installation.  From there, you can continue to use Chef to deploy VMs into the environment.  Because Chef encourages a DevOps automation mindset, I believe there is a significant ROI to your investment in learning how this tool operates if you want to manage hyperscale clouds.