A few weeks ago, I posted about VMs being squeezed between containers and metal.   That observation comes from our experience fielding the latest metal provisioning feature sets for OpenCrowbar; consequently, so it’s exciting to see the team has cut the next quarterly release:  OpenCrowbar v2.2 (aka Camshaft).  Even better, you can top it off with official software support.

The Camshaft release had two primary objectives: Integrations and Services.  Both build on the unique functional operations and ready state approach in Crowbar v2.

1) For Integrations, we’ve been busy leveraging our ready state API to make physical servers work like a cloud.  It gets especially interesting with the RackN burn-in/tear-down workflows added in.  Our prototype Chef Provisioning driver showed how you can use the Crowbar API to spin servers up and down.  We’re now expanding this cloud-like capability for Saltstack, Docker Machine and Pivotal BOSH.

2) For Services, we’ve taken ops decomposition to a new level.  The “secret sauce” for Crowbar is our ability to interweave ops activity between components in the system.  For example, building a cluster requires setting up pieces on different systems in a very specific sequence.  In Camshaft, we’ve added externally registered services (using Consul) into the orchestration.  That means that Crowbar will either use existing DNS, Database, or NTP services or set it’s own.  Basically, Crowbar can now work FIT YOUR EXISTING OPS ENVIRONMENT without forcing a dedicated Crowbar only services like DHCP or DNS.

In addition to all these features, you can now purchase support for OpenCrowbar from RackN (my company).  The Enterprise version includes additional server life-cycle workflow elements and features like HA and Upgrade as they are available.

There are AMAZING features coming in the next release (“Drill”) including a message bus to broadcast events from the system, more operating systems (ESXi, Xenserver, Debian and Mirantis’ Fuel) and increased integration/flexibility with existing operational environments.  Several of these have already been added to the develop branch.

With the OpenCrowbar v2.1 out, I’ve been asked to update the video library of Crowbar demos.  Since a complete tour is about 3 hours, I decided to cut it down into focused demos that would allow you to start at an area of interest and work backwards.

I’ve linked all the videos below by title.  Here’s a visual table on contents: 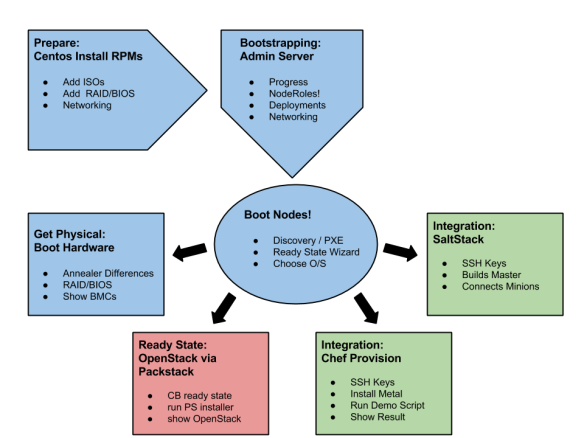 The heart of the demo series is the Annealer and Ready State (video #3).

I’ve tried to do some post-production so limit dead air and focus on key areas.  As always, I value content over production values so feedback is very welcome!

When Dell pulled out from OpenCrowbar last April, I made a commitment to our community to find a way to keep it going.  Since my exit from Dell early in October 2014, that commitment has taken the form of RackN.

RackN focuses on maintenance and support of OpenCrowbar for ready state physical provisioning.  We will build the community around Crowbar as an open operations core and extend it with a larger set of hardware support and extensions.  We are building partnerships to build application integration (using Chef, Puppet, Salt, etc) and platform workloads (like OpenStack, Hadoop, Ceph, CloudFoundry and Mesos) above ready state.

I’ve talked with hundreds of people about the state of physical data center operations at scale. Frankly, it’s a scary state of affairs: complexity is increasing for physical infrastructure and we’re blurring the lines by adding commodity networking with local agents into the mix.

Making this jumble of stuff work together is not sexy cloud work – I describe it as internet plumbing to non-technical friends.  It’s unforgiving, complex and full of sharp edge conditions; however, people are excited to hear about our hardware abstraction mission because it solves a real pain for operators.

I hope you’ll stay tuned, or even play along, as we continue the Open Ops journey.

I’ve been watching to see if other open “bare metal” projects would morph to match the system-level capabilities that we proved in Crowbar v1 and honed in the re-architecture of OpenCrowbar.  The answer appears to be that Crowbar simply takes a broader approach to solving the physical ops repeatably problem.

Crowbar Architect Victor Lowther says “What makes Crowbar a better tool than Cobbler, Razor, or Foreman is that Crowbar has an orchestration engine that can be used to safely and repeatably deploy complex workloads across large numbers of machines. This is different from (and better than, IMO) just being able to hand responsibility off to Chef/Puppet/Salt, because we can manage the entire lifecycle of a machine where Cobbler, Razor and Chef cannot, we can describe how we want workloads configured at a more abstract level than Foreman can, and we do it all using the same API and UI.”

Since we started with a vision of an integrated system to address the “apply-rinse-repeat” cycle; it’s no surprise that Crowbar remains the only open platform that’s managed to crack the complete physical deployment life-cycle.

The Crowbar team realized that it’s not just about automation setting values: physical ops requires orchestration to make sure the values are set in the correct sequence on the appropriate control surface including DNS, DHCP, PXE, Monitoring, et cetera.  Unlike architectures for aaS platforms, the heterogeneous nature of the physical control planes requires a different approach.

We’ve seen that making more and more complex kickstart scripts or golden images is not a sustainable solution.  There is simply too much hardware variation and dependency thrash for operators to collaborate with those tools.  Instead, we’ve found that decomposing the provisioning operations into functional layers with orchestration is much more multi-site repeatable.

If we want to start cleaning up physical ops, we need to stop looking at operating system provisioning in isolation and start looking at the full server bring up as just a part of a broader system operation that includes networking, management and operational integration.