When we started using Chef in 2011, there was a distinct gap around bootstrapping systems.  The platform did a great job of automation and even connecting services together (via the Search anti-pattern, see below) but lacked a way to build the initial clusters automatically.

The current answer to this problem from Chef is refreshingly simply: a cookbook API extension called Chef Provisioning.  This approach uses the regular Chef DSL in recipes to create request and bind a cluster into Chef.  Basically, the code simply builds an array of nodes using an API that creates the nodes if they are missing from the array in the code.  Specifically, when a node is missing from the array, Chef calls out to create the node in an external system.

For clouds, that means using the API to request a server and then inject credentials for Chef management.  It’s trickier for physical gear because you cannot just make a server in the configuration you need it in.  Physical systems must first be discovered and profiled to ready state: the system must know how many NICs and disk drives are available to correctly configure the hardware prior to laying down the Operating System.

OpenCrowbar interacts with Chef Provisioning by pulling nodes from the System deployment into a Chef Provisioning deployment.  That action then allows the API client to request specific configurations like Operating System or network that need to be setup for Chef to execute.  Once these requests are made, Crowbar will simply run its normal annealing processes to ready state and then injects the Chef credentials.  Chef waits until the work queue is empty and then takes over management of the asset.  When Chef is finished, Crowbar can be instructed to reconfigure the node back to a base state.

Does that sound simple?  It is simple because the Crowbar APIs match the Chef needs very cleanly.

It’s worth noting that this integration is a great test of the OpenCrowbar API design.  Over the last two years, we’ve evolved the API to make it more final result focused.  Late binding is a critical concept for the project and the APIs reflect that objective.  For Chef Provisioning, we allow the integration to focus on simple requests like “give me a node then put this O/S on the node and go.”  Crowbar has the logic needed to figure out how to accomplish those objectives without much additional instruction.

Bonus Side Note: Why Search can become an anti-pattern?

Search is an incredibly powerful feature in Chef that allows cross-role and cross-node integration; unfortunately, it’s also very difficult to maintain as complexity and contributor counts grow.  The reason is that search creates “forward dependencies” in the scripts that require operators creating data to be aware of downstream, hidden consumers.  High Availability (HA) is a clear example.  If I add a new “cluster database” role to the system then it is very likely to return multiple results for database searches.  That’s excellent until I learn that my scripts have coded search to assume that we only return one result for database lookups.  It’s very hard to find these errors since the searches are decoupled and downstream of the database cookbook.  Ultimately, the community had to advise against embedded search for shared cookbooks

I spent Tuesday and Wednesday at DevOpsDays Austin and continue to be impressed with the enthusiasm and collaborative nature of the DOD events.  We also managed to have a very robust and engaged twitter backchannel thanks to an impressive pace set by Gene Kim!

I’ve still got a 5+ post backlog from the OpenStack summit, but wanted to do a quick post while it’s top of mind.

My takeaways from DevOpsDays Austin:

I’d be interested in hearing what other people found interesting!  Please comment here and let me know.

If you are coming to the OpenStack summit in San Diego next week then please find me at the show! I want to hear from you about the Foundation, community, OpenStack deployments, Crowbar and anything else.  Oh, and I just ordered a handful of Crowbar stickers if you wanted some CB bling.

Matt Ray (Opscode), Jason Cannavale (Rackspace) and I were Ops track co-chairs. If you have suggestions, we want to hear. We managed to get great speakers and also some interesting sessions like DevOps panel and up streaming deploy working sessions. It’s only on Monday and Tuesday, so don’t snooze or you’ll miss it.

My team from Dell has a lot going on, so there are lots of chances to connect with us:

At the Dell booth, Randy Perryman will be sharing field experience about hardware choices. We’ve got a lot of OpenStack battle experience and we want to compare notes with you.

I’m on the board meeting on Monday so likely occupied until the Mirantis party.

See you in San Diego!

PS: My team is hiring for Dev, QA and Marketing. Let me know if you want details.

I could not be happier with the results Crowbar collaborators and my team at Dell achieved around the 1st Crowbar design summit. We had great discussions and even better participation.

I knew from the start that we had too little time and, thankfully, people were tolerant of my need to stop the discussions. In the end, we were able to cover all the planned topics. This was important because all these features are interlocked so discussions were iterative. I was impressed with the level of knowledge at the table and it drove deep discussion. Even so, there are still parts of Crowbar that are confusing (networking, late binding, orchestration, chef coupling) even to collaborators.

In typing up these notes, it becomes even more blindingly obvious that the core features for Crowbar 2 are highly interconnected. That’s no surprise technically; however, it will make the notes harder to follow because of knowledge bootstrapping. You need take time and grok the gestalt and surf the zeitgeist.

Collaboration Invitation: I wanted to remind readers that this summit was just the kick-off for a series of open weekly design (Tuesdays 10am CDT) and coordination (Thursdays 8am CDT) meetings. Everyone is welcome to join in those meetings – information is posted, recorded, folded, spindled and mutilated on the Crowbar 2 wiki page.

These notes are my reflection of the online etherpad notes that were made live during the meeting. I’ve grouped them by design topic.

Last week, my team at Dell led a world-wide OpenStack Essex Deploy event. Kamesh Pemmaraju, our OpenStack-powered solution product manager, did a great summary of the event results (200+ attendees!). What started as a hack-a-thon for deploy scripts morphed into a stunning 14+ hour event with rotating intro content and an ecosystem showcase (videos).  Special kudos to Kamesh, Andi Abes, Judd Maltin, Randy Perryman & Mike Pittaro for leadership at our regional sites.

Clearly, OpenStack is attracting a lot of interest. We’ve been investing time in content to help people who are curious about OpenStack to get started.

While I’m happy to be fueling the OpenStack fervor with an easy on-ramp, our primary objective for the Deploy Day was to collaborate on OpenStack deployments.

On that measure, we have room for improvement. We had some great discussions about how to handle upgrades and market drivers for OpenStack; however, we did not spend the time improving Essex deployments that I was hoping to achieve. I know it’s possible – I’ve talked with developers in the Crowbar community who want this.

If you wanted more expert interaction, here are some of my thoughts for future events.

Do you have other comments and suggestions? Please let me know!

Since my team at Dell sponsored the inaugural ChefConf, we had the good fortune to get a handful of passes and show up at the event in force.  I was also tapped for a presentation (Chef+Crowbar gets Physical+OpenStack Cloud) and Ignite session (Crowbar history).

I live demo’ed using a single command window with knife to manage both physical and cloud infrastructure.    That’s freaking cool!  (and thanks to Matt Ray for helping to get this working)

It’s no surprise that I’m already a DevOps advocate and Opscode enthusiast, there were aspects of the conference that are worth reiterating: 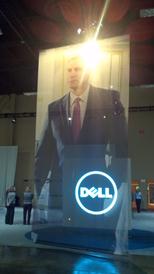 It’s OpenStack Summit time again for my team at Dell and there’s deployment in the air. It’s been an amazing journey from the first Austin summit to Folsom today. Since those first heady days, the party has gotten a lot more crowded, founding members have faded away, recruiters became enriched as employees changed email TLDs and buckets of code was delivered.

Throughout, Dell has stayed the course: our focus from day-one has been ensuring OpenStack can be deployed into production in a way that was true to the OpenStack mission of community collaboration and Apache-2-licensed open source.

We’ve delivered on the making OpenStack deployable vision by collaborating broadly on the OpenStack components of the open source Crowbar project. I believe that our vision for sustainable open operations based on DevOps principles is the most complete strategy for production cloud deployments.

We are at the Folsom Summit in force and we’re looking forward to discussions with the OpenStack community. Here are some of the ways to engage with us:

My team has been in the field talking to customers and doing OpenStack deployments. We are proud to talk about it and our approach.

Mostly importantly, we want to collaborate with you on our Essex deployments using Crowbar.  Get on our list, download/build crowbar, run the “essex-hack” branch and start banging on the deploy.  Let’s work together to make this one rock solid Essex deploy.