We’ve had a number of community discussions (OSCON, SFO & SA-TX) around the process for OpenStack Core definition.  These have been animated and engaged discussions (video from SA-TX): my notes for them are below.

While the current thinking of a testing-based definition of Core adds pressure on expanding our test suite, it seems to pass the community’s fairness checks.

Overall, the discussions lead me to believe that we’re on the right track because the discussions jump from process to impacts.  It’s not too late!  We’re continuing to get community feedback.  So what’s next?

Want to to discuss this in your meetup? Reach out to me or someone on the Board and we’ll be happy to find a way to connect with your local community!

So far, the Core discussion has been about defining the process that we’ll use to determine what is core.  Assuming we move forward, the next step is to implement that process by selecting which tests are “must pass.”  That means we have to both figure out how to pick the tests and do the actual work of picking them.  I suspect we’ll also find testing gaps that will have developers scrambling in Ice House.

Obviously, there are a lot of details to work out!  I expect that we’ll have an interim process to select must-pass tests before we can have a full community driven methodology.

What do you think?  I’d like to hear your opinions on this!

As we take the OpenStack Core discussion to a larger audience, I was asked to create the summary version the discussion points.  We needed a quick visual way to understand how these consensus statements interconnect and help provide context.  To address this need, I based it on a refined 10 core positions to create the following OpenStack Core flowchart. 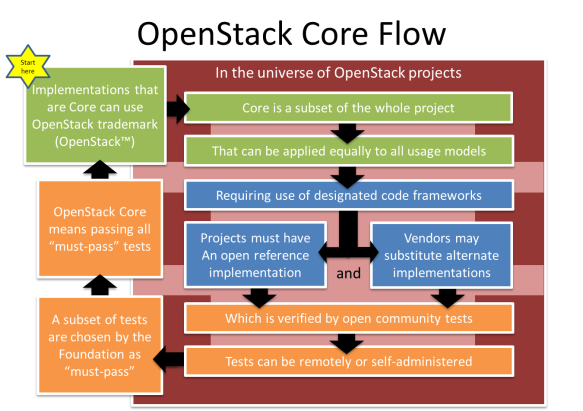 I hope this helps connect the dots on the core discussions so far.

I’d like to clean-up the positions to match the flow chart and cross reference.  Stay tuned!  This flowchart is a work in process – updates and suggestions are welcome!

Error: Twitter did not respond. Please wait a few minutes and refresh this page.